on meeting your heroes...

In the late 1980s, I worked in a high-end electronics store. Pre-Best Buy, we sold specialty audio and video gear. There were a lot of large-screen TVs on display (rear projection!) and I always kept at least one tuned to The Nashville Network. I did not consider myself a country music fan but I kept the TV tuned there in hopes of catching a music video from Dwight Yoakam, Allison Krauss, The Sweethearts of the Rodeo, or… Foster & Lloyd. The first time I saw the video for “What Do You Want From Me This Time” I was blown away by the tight Everly Brothers harmony, the Telecaster twang, and Radney Foster’s long hair, John Lennon glasses, and dangly earring. It was the earliest stage of my return to country and roots music.

A few years later… same electronics store, same big TVs, and Radney’s new solo single “Nobody Wins” was in heavy rotation on TNN. Long hair was gone and the dangly earring was now a hoop but the big jangly Rickenbacker guitars, stellar songwriting, Lennon specs, and rock-star cool remained. I loved this guy… I kinda wanted to BE this guy.

In the early 2000’s I heard a new song from an artist my, by then, Alt-Country sensibilities were not supposed to embrace. I did not tell anybody I liked the song but caught myself tuning into mainstream country stations in hopes I’d hear it. After a month or so I was completely vindicated when I realized that Keith Urban’s “Raining on Sunday” was actually Radney Foster’s “Raining on Sunday”.

In 2010 some buddies and I started a roots rock band called Monkhouse. We played a regular gig at one of the coolest dive bars in the country. We were trying to find a way to talk about faith and hope in a different way. A listener described us as “Train beat, swamp boogie, and a little Jesus”. We wanted a big Americana-Gospel flavored anthem to close our shows that sort of encompassed what the band was about. We landed on Radney’s “A Little Revival”.

In 2015 I attended a songwriting workshop in Austin led by Jack Ingram and Radney Foster. I hit town wondering if I was really a songwriter and, after Radney’s “hell yes!” from across the room at The Saxon Pub and a long conversation later at the bar, I left town believing I WAS a songwriter.

Since then there have been a few exchanges on social media or text. There was even a phone call. I released, at 52, my first record. And then there was Shari (that is another story).

Last weekend, I spent the afternoon in the studio with Radney at the controls. I brought a song I wrote for a project in which Radney is deeply involved. Radney engineered the session and sang harmony vocals. Eddie played guitar and sang the high lonesome part. Shari supervised and told us when we were doing it wrong. Then we moved to the kitchen table, drank good wine (and later good bourbon), told stories, and even shed a tear over Guy.

They say you should never meet your heroes… Bullshit. 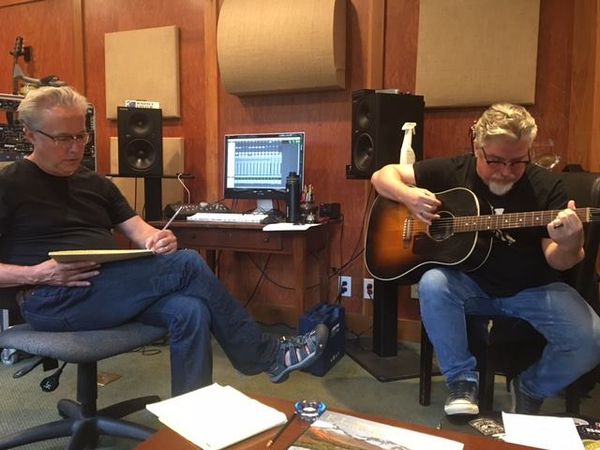